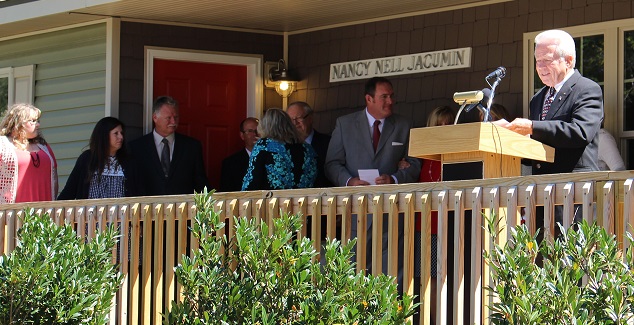 The year-long building project is the testimony of giving by many.

A new four-unit apartment building for married students dedicated at Fruitland Baptist Bible College Sept. 14 is a testimony about giving, both by one particular Baptist family and by numerous volunteers, churches and businesses.

The new building on the college’s main campus at Hendersonville was named the Nancy Nell Jacumin Family Apartments and includes two three-bedroom apartments and two two-bedroom apartments. The new housing has been eagerly anticipated by Fruitland administrators as enrollment has climbed over recent years, with more than 300 total students expected this quarter in all programs, including online courses. “We stand here on the property of a house the Lord has built,” declared Fruitland President David Horton, quoting Psalm 127:1, “Except the Lord build the house, they labour in vain that build it.”

Fruitland is owned by the Baptist State Convention of North Carolina and receives about half of its annual operating costs through the Cooperative Program, the convention’s unified budget system. More than 800 churches affiliated with the Baptist State Convention are led by Fruitland graduates. Students will move into the new apartments this month as the new quarter begins, according to Bobby Garrett, the school’s facilities manager who has worked closely with the construction project.

The new apartment has an assessed value of about $500,000, but the total cost has been less than $180,000, mostly for materials, Garrett said. A gift of $130,000 from Baptist layman Jim Jacumin and his family covered most of that amount. Balance of the funds came from the sale of seven mobile homes that had been used by Fruitland for student housing over many years and become worn out.

Jacumin, a member of East Valdese Baptist Church in Valdese and a former North Carolina state senator, had a long and successful career as engineer and businessman, who devised new techniques for dying textiles. He has helped fund and construct many Burke County facilities such as a high school football stadium and public swimming pools, among others. Jacumin has also funded Baptist facilities, including a missions center at Southeastern Baptist Theological Seminary in Wake Forest and, more recently, housing units at Caraway Conference Center near Asheboro. Jacumin received the 2014 Baptist Heritage Award from the Baptist State Convention for his multiple contributions to Baptist life. He has served on boards of several Baptist entitles, including the board of directors of the Baptist State Convention. He has also been an active member of the Gideons for many years.

Fruitland’s new apartment building is named for Mrs. Nancy Nell Jacumin, Jacumin’s wife, who passed away earlier this year. Members of the Jacumin family, including Jacumin’s son, Marty, pastor of Bay Leaf Baptist Church in Raleigh, attended the gathering. “I hope the kind of testimony that this family has lived will be a challenge and motivation for others to live their lives surrendered to God,” said Milton Hollifield Jr., executive director-treasurer of the Baptist State Convention. “The testimony of her life will live on, invested in the lives of those who will be involved in the work of God’s Kingdom,” he said.

Jim Jacumin told how his father was robbed of his innovative tractor designs by a corporation which incorporated them on tractors sold them across the country. Yet his father was not bitter. Now more people will get to enjoy the innovations, he said. Jacumin said that experience was a lesson on giving he never forgot.
“Why we live can best be explained by a simple four-letter word: G-i-v-e. You see, you can give without loving, but you can’t love without giving. Nancy loved to give,” he said.

Marty Jacumin recalled how his mother prayed that he would never be comfortable in his sin, but rather stay miserable till he repented and returned to the Lord. “Love God and love others. I learned that from my mother,” he said.

The dedication service was opened with prayer by Rev. Lee Pigg, pastor of Hopewell Baptist Church, Monroe, and chairman of Fruitland’s Board of Directors. Brian Davis, associate executive director-treasurer of the Baptist State Convention, closed the service with prayer.

While the Jacumin gift covered most of the building materials, 136 volunteers from multiple churches provided the labor to convert those materials into a building, beginning with groundbreaking in October 2014.

Construction began in late December last year. Numerous people attending the dedication service wore red T-shirts carrying the logo of the Carpenter’s Hands Ministry, construction work volunteers from many churches who worked on the project. “They were the backbone of this project,” said David Horton at the dedication service as he expressed appreciation for their ministry. Garrett said volunteers came from local churches, plus Kings Mountain, Mebane and even from South Carolina and Tennessee. Mebane resident James R. Faulk, for example, who attended the dedication with his wife, Debbie, was one of the many volunteers who made multiple trips to the campus to work during the past year. Faulk worked on the building’s wiring, heating and air conditioning and drywall. The Faulks are members of Edgewood Baptist Church, Mebane. Garrett also named many companies far and wide which donated building supplies and equipment for the project. The apartments could best be described as simple but comfortable; each unit is equipped with kitchen appliances, washer and dryer. Garrett pointed out that the building’s basement storage is important for students, because some families sell their homes to attend Fruitland and need to store their furniture and other possessions.

Fruitland will seek approval from the Baptist State Convention to build a second four-unit apartment building to meet pressing housing needs, Horton said. But the school will seek to complete the building without incurring heavy debts, he said.

by Mike Creswell with the Baptist State Convention of NC

The Art of Marriage Conference Oct 16-17

A Word of Thanks

How to Help Fruitland

A Letter from Steve Scoggins